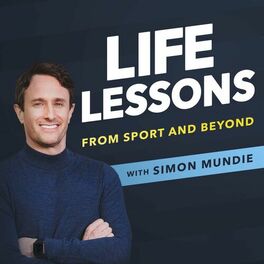 Life Lessons: From Sport and Beyond

Will Greenwood is one of England's greatest ever rugby players. He played centre and was a key member of the 2003 World Cup winning side.His crucial try helped turn the game when England were trailing Wales in the quarter-finals, and one of the most memorable photos taken after England were crowned champions feautured Will and Jonny Wilkinson in a euphoric embrace.It has been nearly twenty years since England won the World Cup, and in that time Will says he has evolved hugely as a person. You could say his focus has gone from 'me' to 'we', a natural evolution for many of us over the course of a lifetime, although in Will's case it has been sped along by his experiences in sport, in business and in everyday life. Among other nuggets, Will emphasises the importance of kindness, 'radical acceptance' and careful use of language - subjects he touches on in his new book 'World Class: How to Lead, Learn and Grow like a Champion'**Follow me:on instagram https://www.instagram.com/simonmundie/on twitter https://twitter.com/simonmundieAnd for the 'Mundie on Monday' newsletter - featuring three of the best Life Lessons from three years and more than 150 of these conversations - head to simonmundie.com See acast.com/privacy for privacy and opt-out information.