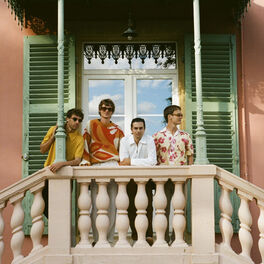 Put Down Your Phone

In Deeper - A COLORS SHOW

When Will I Learn

There is Always One More Time

A Straight And Honest Flame Shakes In My Heart (feat. Tora)

2020 was a year of unprecedented events and yet out of it, the true nature of adaptability and creativity has still managed to find ways to shine. For Australian electronic act Tora, this has never been truer of their year in making their third album, A Force Majeure. Relocating from Byron Bay to Amsterdam in the early months of 2020, a full year of touring through Europe and America was quickly halted due to the onset of COVID-19. Facing an undetermined period of time off-road but also away from Australia, the band turned their focus to staying creative instead. With nothing but time on their side, studio time became an utterly immersive experience. Renting and fitting out studio space to their own requirement and dedicating their days to working on music meant the band was able to approach the process not hindered by the pressures of time or schedule. And what they emerged from this period with is an album that is Tora at their most dynamic yet. Eleven songs capture the essence of a band that have found themselves a world away from the normalcy they were accustomed to. Eleven songs shine bright with a refreshed perspective and a deepened understanding of the group’s artistry and identity. As with their sophomore album, 2019’s Can’t Buy The Mood, Tora’s latest effort saw the band in both writer and producer mode. Here, they push themselves further into a sonic space that plays further with tempo and tone, introducing more light and dark tones than in previous works. Though pushed out of their comfort zone in many ways, Tora is at their most refined and self-aware on A Force Majeure. In navigating this new normal together, the band has emerged out the other side of this process tighter as a unit than before; it’s a dynamic irrevocably tied to the music. As a definitive snapshot of the type of band Tora is today, A Force Majeure is sophisticated, mature and beautifully contemporary in both sound, feel and execution.