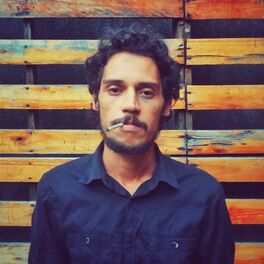 Composer, coder, designer, tech-head, gamer. Djalma aka DJ Fino is on electronic music since childhood, when his parents introduced him Kraftwerk's Electric Café, followed by Jean Michel Jarre, Giorgio Moroder and many other pioneers of the early synthesizers days. he built his first synth when he was 9 years old. Pioneer on the electronic music scene on Bahia, DJ Fino paved his way on exquisite mixing technique and dj sets full of energy. After a 7 year hiatus researching new sounds, new origins, he founded the Jabuticaba Records, an electronic music label focusing on Latin and psychedelic music, along with his fellow DJs Diogo "Bone" Reis and Daniel "OPreto" Olavo. In this new mixture, Djalma is Born. Mixing cultures like cocek music and samba, from the depths of Africa thru the clouds the south-american rainforest, he sets its tone on a multicultural musical journey