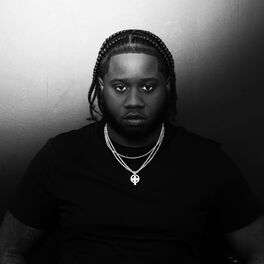 Blessed, It Could Be Worse...

Ambitions of a Patek

Toronto’s Portion equally captures loss and grief as he does triumphs and perseverance through virtuous storytelling and mellifluous harmonies. He is an integral part in ushering in the new generation of rap in the city with his unique marriage of undeniable melodies inspired by Atlanta and the striking imagery, swagger and wit of East Coast hip-hop. Portion crept his way into hip-hop cognizance with the organic buzz that grew around 2017’s “Fif’s World.” Without an album out, he’s crossed over into the international market with hit records like “Ambitions of a Patek,” “Big Step,” and “Slime Me Out.” Now, the freshly signed Warner Music Canada artist is gearing up to formally introduce himself to the masses with his forthcoming debut album. Born and raised in Scarborough, ON, Portion's big brother piqued his interest in music at a young age. Artists like Nas and Noreaga were introduced to him as a toddler while his brother also tried his hand at rapping. By the time he was seven years old, Portion was among the sea of children across the world that gravitated towards the colossal presence of Dipset. A product of the platinum era, his tastes evolved with the culture as artists like Chief Keef and Future emerged as barrier-breaking voices for disenfranchised, and often silenced communities. The tragedies Portion witnessed in his life in Toronto and the lessons he’s taken away from those situations are the headspring that stimulates his music. The pain-riddled melodies - similar to those of Chief Keef and Future - are a reflection of his experiences that have shaped him into the man, and the artist, he is today. His brother’s incarceration left him to his own devices to figure out how to rap during his younger years. By the time he was in high school, negative influences seeped into his day-to-day life, derailing him further from pursuing his passion. Despite the streets leading him astray, the loss of two pivotal figures in his life led him back onto the right path. His cousin Moneyy passed away in 2015, just as Portion teetered a tightrope between the streets and music. The encouragement of Moneyy was vital to Portion’s artistic development. The last time they’d cross paths would be at the studio before Moneyy died from gun violence. It’s the pain of losing his cousin that motivated him to create a sound tailored towards the lived experiences of himself and his friends that his community and city can connect to - pain music, as he calls it. The fatal shooting of Anthony “Fif” Soares in 2017 caught international headlines after Drake shed light on his death. It was the independent release of Portion’s breakout hit “Fif’s World” - an emotional and deeply personal tribute Portion penned to his late friend and someone he regarded as a big brother - that brought him acclaim throughout North America. Airy vocal samples, plaintive warbles for ad-libs, and an authentic portrayal of a man loved by Scarborough and beyond resonated across Toronto and turned heads to Portion immediately. The regional buzz around the single cemented it into the iconic 2017 run in Toronto’s underground rap scene that included viral smash hits like K Money’s “Come Outside” and PENGZ & TwoTwo’s “Griselda Blanco.” Publications like Complex took note of Portion’s distinguished sound, yet he’d be the first to admit that he struggled to fully commit to his now-signature sing-rap variation at the time. His forthcoming major-label debut is a culmination of self-discovery, patience, and trial-and-error. Recorded in between Atlanta and his home studio in Toronto, the project encapsulates his growth and maturity since his breakout hit. Songs like “99 PRBLMS” present Portion in his fullest form to date. Crooning over twangy guitar and quaking bass, Portion narrates his road to riches tale with survivor’s remorse weighing heavily on his mind. He compliments these melancholic records with exhilarating bangers like “No Luck” where the unapologetic confidence in his electrifying voice leaps through jangling piano keys and pulsating 808s. It’s a body of work that proves the effortless nature of Portion’s penmanship in evoking tears just easily as joy. There isn’t a moment that Portion takes for granted in his ascent to stardom. “Having money with no guidance is the same thing as being broke,” is a daily mantra that carries with himself. It’s a reminder that emphasizes the value of life experiences over dollars. It’s moments like when a teenaged Smooky Margielaa taught him how to contort his vocals. Or the week he spent in Miami with Tory Lanez where he witnessed the gravity of being a public figure. Both of those eye-opening encounters were teachings that prepared him for the next phase in his career. “I want to take it to the next level, for real. I don’t ever want to be stuck as just a rapper,” explains Portion of the trajectory of his career. From fashion to behind-the-scenes songwriting and everything in between, Portion has his sights on taking his career to the moon with his city on his back.