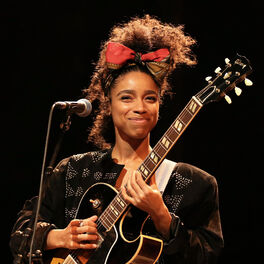 Is Your Love Big Enough?

What You Don't Do (GRADES Remix)

What You Don't Do (Tom Misch Remix)

A soulful singer-songwriter inspired by the likes of Jill Scott and Mary J. Blige, Lianne La Havas's elegant pop ballads marked her out as one of the breakthrough talents of 2012 and drew comparisons with Emeli Sandé. Raised in Tooting, London, she wrote her first song at 11-years-old with the help of her musician father and started her career as a backing vocalist for Paloma Faith, before working on The Paris Parade project. Real name Lianne Barnes, she adapted her Greek father's surname Vlahavas into her stage name and was signed to a development deal by Warner Bros in 2010. A stunning performance on Later.with Jools Holland led to support slots with Bon Iver and Alicia Keys before debut album Is Your Love Big Enough? (2012) earned a Mercury Prize nomination and was named Album of the Year at the iTunes Awards. It also reached Number 4 in the UK charts and gained huge praise for the delicate, jazz-tinged, R&B pop and assured vocals.