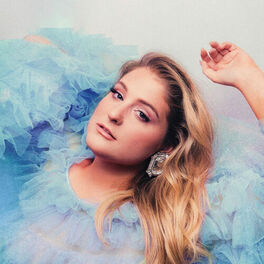 With You - The Remixes

Make You Dance (The Remixes)

Nice to Meet Ya (The Remixes)

I'll Be There for You ("Friends" 25th Anniversary)

All About That Bass

When she was still in high school, singer/songwriter Meghan Trainor landed a deal with a Nashville music publishing company and started writing songs for artists from all corners of the music world. A multi-instrumentalist who put out three albums on her own by the age of 17, the 20-year-old Massachusetts native has penned tracks for everyone from Grammy-winning country superstars Rascal Flatts and Grammy-nominated country artist Hunter Hayes to reggae/rock/R&B group Common Kings and Hot Chelle Rae singer Ryan Follesé. Recently signed to Epic Records, Meghan is now gearing up to release a debut album that brings her intense flair for indelible melody to her own blend of throwback hip-hop, classic pop, and beat-heavy Caribbean music. Now based in Nashville, Meghan joined forces with Kevin Kadish (a Grammy-nominated producer/songwriter who’s also worked with Miley Cyrus and Jason Mraz) to infuse hook-minded songcraft with an infectious sense of fun on her upcoming debut. Inspired by everything from the swing of soca (a Caribbean-music genre that combines calypso rhythms with hip-hop and reggae) to the melody-driven musicality of country music, the album features Meghan’s bold and bouncy debut single “All About That Bass.” With its carefree celebration of girls with good curves, “All About That Bass” sets the tone for the no-holds-barred but breezy authenticity that powers Meghan’s approach to songwriting. Growing up on the Massachusetts island of Nantucket, Meghan fell in love with music early on, thanks in big part to her dad (a church organist who raised her on soul legends like James Brown and Ray Charles) and her uncle Burton Toney (a Tobago-born recording artist regarded for his fusion of soca and R&B). At age seven she wrote her first song—a reworking of the Hoagy Carmichael classic “Heart & Soul”—and within a few years began throwing herself fully into songwriting. Struck by her dedication and natural talent, Meghan’s parents hooked her up with some music production software so she could start self-recording. In the meantime, Meghan (a longtime piano player) picked up a guitar, quickly mastered a bunch of chords, and eventually added ukulele and percussion to her repertoire. Along with racking up such honors as the Best Female Artist award at the 2009 International Acoustic Music Awards and the grand prize at the 2010 New Orleans Songwriters Festival, Meghan began attending songwriting expos in her mid-teens in hopes of getting her music out into the world. Instead of accepting the full scholarship offered by Boston’s prestigious Berklee College of Music, Meghan spent her late teens flying back and forth between her home and Los Angeles to team up with producers and artists on songwriting sessions. Through those sessions, Meghan has now partnered up with major producers and songwriters like J.R. Rotem (Rihanna, Maroon 5, Nicki Minaj), SoulShock (Madonna, Usher, Solange), and Ari Levine (Bruno Mars, Pitbull, Cee Lo Green). And in a feat that’s especially meaningful to her, the upcoming Rascal Flatts album includes two songs Meghan wrote in collaboration with DJ/producer Jesse Frasure and singer/songwriter Shay Mooney. “Hearing my songs being sung by Rascal Flatts was so amazing,” she says. “I used to listen to their records all the time when I was younger because I thought the songwriting was so great, so hearing those two tracks just made me realize all that’s happened over the past few years and how far I’ve come with my writing.” A couple years into her publishing deal, Meghan came up with “All About That Bass,” a super-playful but unapologetic self-empowerment anthem for ladies who don’t fit the standard beauty ideal. The song is now her debut single as an artist for Epic Records. “Writing that song, I was thinking about girls today and how there’s even more pressure to be thin now, because of Instagram and selfies and that constant competition,” she says, noting that the message of “All About That Bass” is to “love your body no matter what.” With songs addressing everything from drunk-texting and the walk of shame to dating anxiety and post-breakup heartache, there’s no shortage of “All About That Bass”-style honesty on Meghan’s debut album.