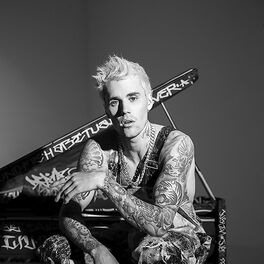 As Long As You Love Me (Remixes)

Beauty And A Beat (Remixes)

Under The Mistletoe (Deluxe Edition)

Canadian teenager Justin Bieber became one of the youngest pop stars in history when he struck it big all over the world in 2009 with the R&B single 'One Time', aged only 15. He was signed up in 2008 by American manager Scooter Braun after seeing his videos on YouTube. Braun teamed him up with Usher, resulting in the 2009 single 'One Time', a love song mixing pop, R&B and hip-hop that caught the attention of American radio and ultimately became a major hit in the US, Canada, UK and other parts of Europe.

With its themes of teen romance and growing up, Bieber's debut studio album 'My World 2.0' (2010) quickly established him as a major new talent, becoming one of the bestselling albums of the year and selling over a million copies in the US alone. The lead single, 'Baby' featuring Ludacris hit 12x platinum sales and peaked in the top ten of charts around the world. More hit singles - 'One Less Lonely Girl', 'Love Me' and 'Favourite Girl' - followed as Bieber hit the road on a massive promotional tour in 2010. He even performed for US President Barack Obama and his wife Michelle at the White House, and won a BRIT Award in 2011 for Best International Breakthrough Act.

A 3D concert film/documentary, 'Justin Bieber: Never Say Never', was released in 2011 and was a box office success. His second studio album, 'Under the Mistletoe', also arrived in 2011 and included a duet with Mariah Carey on her hit single 'All I Want for Christmas Is You'. In quick succession, 'Believe' was released in 2012 and included the singles 'Boyfriend' and 'Beauty and a Beat' with Nicki Minaj. 'Believe' landed number one in countries around the world including his native Canada, Australia, Australia, the UK and went straight to the top of the Billboard 200. Following on from his 2011 film, 'Justin Bieber's Believe' arrived in 2013, which sheds light on Bieber's private life and explores his meteoric rise to fame.

2015 marked a shift in sound and musical style with the collaboration with Jack Ü on the single 'Where Are Ü Now'. It won Best Dance Recording at the 2016 Grammy Awards, Best Visual Effects at the 2015 MTV Video Music Awards and Best Collaboration at the MTV Europe Music Awards. It also featured on Bieber's fourth studio album, 'Purpose' (2015), alongside the hit singles 'What Do You Mean?', 'Sorry' and 'Company'. 'Purpose' sold triple and quadruple platinum in countries around the world and once again topped the Billboard 200. In 2016, Bieber continued in a new, mature direction on the single 'Let Me Love You' with DJ Snake and 'Deja Vu' with Post Malone, and then in 2017 on the remix track 'Despacito' with Luis Fonsi and Daddy Yankee.

In 2019, he featured on Ed Sheeran's single 'I Don't Care', who co-wrote 'Cold Water' by Major Lazer in 2016, also featuring Bieber and MØ, and Bieber's 'Love Yourself'. He also sang on the remix of Billie Eilish's hit 'Bad Guy'. The following year, fifth album 'Changes' arrived, which features the lead single 'Yummy' and 'Get Me' featuring Kehlani. Also arriving in 2020 was Bieber's ten-part docuseries, 'Justin Bieber: Seasons' which had its premiere on YouTube.