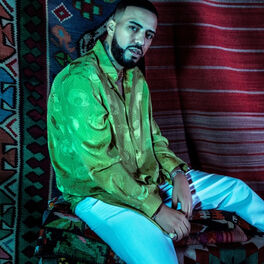 Karim Kharbouch, who performs under the name French Montana, is a Moroccan-born hip-hop artist who grew up in New York. He started out as a battle rapper and sold a series of DVDs on the streets under the umbrella title of 'Cocaine City' until 2003 when he suffered a gunshot wound that required lengthy treatment.

Collaborating with various artists he released mixtapes and in 2011 put out the album 'Coke Boys 2' followed in 2013 by 'Excuse My French' which went to number one on Billboard's Top Rap Albums and Top R&B/Hip-Hop Albums Charts and number four on the Billboard 200. A mixtape titled 'Coke Wave' with rapper Max B came out in 2014 and in 2017 he released the album 'Jungle Rules' which reached number three on the Rap and R&B/Hip-Hop Charts and the Billboard 200. He has had 14 tracks on the Billboard Hot 100 including two in the top ten: 'Loyal' (2014) and 'Unforgettable' (2017). 'Unforgettable' topped Billboard's Hot Rap Songs Chart and went to number two on the R&B/Hip-Hop Chart in the UK. Other UK hit singles were 'Feelin' Myself' (2014) which reached number two, 'Hurtin' Me' (2017) which went to number seven and 'Tip Toe' (2018) which peaked at number five. He was nominated for the Best Rap Performance in 2017 for 'All the Way Up', which also was nominated as Best Rap Song as was 'All Day' (2016). His 2018 schedule included performances at the Provinssi Festival in Finland, the Oh My! Music Festival in the Netherlands, the Sumol Festival in Portugal, the Wireless Festival in England, the Tomorrowland Festival in Belgium, Lollapalooza Paris, the Center of Gravity Festival in Canada, and in Las Vegas.