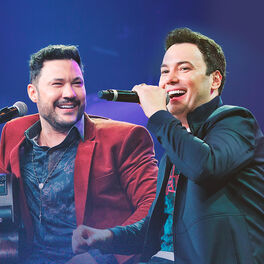 Brazilian Sertaneja duo Joao Bosco & Vinícius have come a long way since they met as children and found themselves competing against each other in a regional music festival. Having tied for second place the two boys, both in their early teens, decided to team up and form a duo. They started by playing at bars and music events in the Mato Grosso du Sol region.

As they grew older both boys went to university, Bosco studying dentistry and Vinícius studying physiotherapy. During their studies the two men had a ready audience for their music among the student population and slowly began to build a music career for themselves, releasing their first album 'Acústico na Bar' in 2003 selling over 40,000 copies in their local area.

Their reputation continued to spread and with four studio albums and eight live albums under their belt, the duo have become an established act with a string of top five hits in the Brazilian Singles Chart. They are known for playing in the traditional Brazilian Sertaneja style and in 2011 won a Latin Grammy in the Best Sertaneja Music Album category.