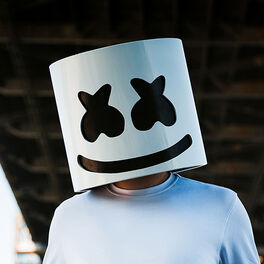 Rescue Me (feat. A Day To Remember)

Christopher Comstock, known professionally as Marshmello, is an American DJ and producer of electronic dance music who garnered attention with appearances in which he wore a full marshmallow head mask. Born in Philadelphia, he began to release mysterious mixtapes in 2015 with his identity finally revealed in 2017. He made his album debut that year with 'Joytime', which went to number five on Billboard's Top Dance/Electronic Albums Chart. His follow-up 'Joytime II' topped the chart in 2018. He has had 23 tracks on Billboard's Hot Dance/Electronic Songs Chart including chart-toppers 'Silence' (2017) featuring Khalid, which was also number one on the Dance Club Songs Chart and reached number three on the UK Singles Chart.

'Wolves' (2017) with Selena Gomez peaked at number three on the R&B/Electronic Chart and nine in the UK, 'Fly' (2018) featuring Leah Culver reached number seven on the Dance/Electronic Chart and his own 'Alone' (2017) peaked at number nine. 'Everyday' (2018) with Logic went to number 16 on Billboard's Hot R&B/Hip-Hop Songs Chart. 'Friends' (2018) with Anne-Marie topped the US Dance Chart and went to number four in the UK and eleven on the Hot 100.