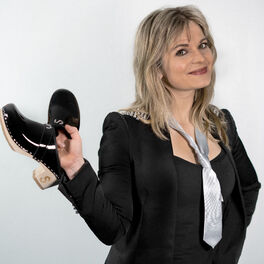 She is the only one on clogs! ...but not only on clogs: Sabrina Stern is now not only known in the pop music industry, but also in the fashion industry as a model and testimonial for numerous brands. Her trademark, besides her bright, clear voice that makes her unmistakable, are her clogs. Three years ago, she discovered the fashionable version of the classic clog for herself and has been wearing them non-stop ever since. "Without wood under my foot, I feel insecure by now and can't give it my all". And although the left foot is, as she says herself, "junk", she wears them in all variations from classic flat to extremely high-heeled - and the fans love it. This has led to Sabrina being known far beyond the borders of Germany and being invited on countless German radio stations, as well as Italian radio. Topics: Clogs, her "junk foot" and of course - her music. Sabrina always has something to tell! Over 300,000 fans follow "the one on clogs" on the biggest social network Facebook and her videos there now reach several million people. Since Sabrina took part in the Swiss preliminary round of the ESC with her song "Liebe auf den ersten Blick" (Love at first sight), things have gone steadily uphill. Various awards and live shows with top artists from the pop music industry followed. Her current singles, all of which she now releases on her own label in order to have even more control over her music and which she also co-wrote herself, all achieved top placements on various radio stations such as Radio Schlagerparadies, NDR 1 or BRF. The single "Einen Tag und eine Nacht", released in spring 2020, easily made it into the Top 100 of the Official Airplay Charts and the song "Nichts ist für immer" (February 2021) stayed in the Top 100 for weeks, making it one of the most played songs on the radio! In addition to her work as a singer, Sabrina Stern is now a sought-after advertising face for well-known fashion labels - she has now designed her own clogs collection. It was a special honour for her when she received "Sabrina Stern crutches" specially designed for her by one of the biggest manufacturers - of course with wooden handles and her lettering made of Swarovski stones - which Sabrina now likes to use before and after her performances or sometimes in her free time to take care of her "junk foot" as often as possible. "Crutches are now an accessory for me, like glasses are for other people, which help you on days when you're not in such a good mood, so that you're definitely in top shape at the end" - and on stage she always gives 100% full throttle even without (walking) help. In 2021, Sabrina Stern will tackle the next step of her career ladder with her proven team and hit producer Willy Klüter - It remains exciting in the life of the woman on clogs, with the junk foot, with her own crutches - and the bell-bright and unmistakable voice.