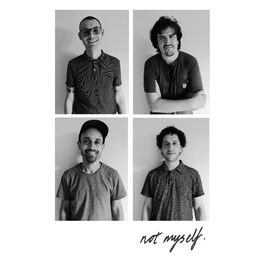 Not Myself was born in the summer of 2018 in San Sebastián, Spain and comprises Ally Morton (Durham, UK - vocals, guitar, production), Aiur Retegi (Oiartzun, Spain - guitar), Joxe Caballero (Andoain, Spain - bass) and Gorkatxain (Andoain, Spain - drums). Their sound stems from the varied interests and projects that each member is or has been involved in. Ally writes and performs solo (but as a duo in the UK) as Massa Confusa, has an ongoing collaborative recording project called Five Pence Game, and is one half of Gozer and the Gatekeeper. Aiur plays in Gozer and the Gatekeeper, used to be in Derive, Kaizen and Ventura, and now plays solo as Pixalino. Joxe is a part of an electronic/experimental group called Alitruta and hardcore punk-band Ixo!!!, but has also played in many other bands including Jupiter Jon, Dollmen, Mar de Cristal and Pheasant’s tears. Gorkatxain has played in various untitled bands. Not Myself are currently working on performing their debut gig in the Basque Country region of Spain where they are based, and releasing their debut album, either in part or in full. However, given the current COVID 19 situation the band cannot put a timescale on when these developments will happen.