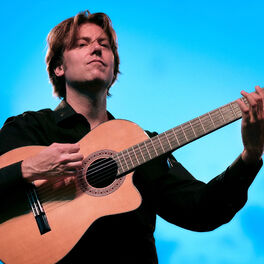 Temple of the Sun

Jim Stubblefield was born and raised in Pasadena, California. He started taking acoustic guitar lessons when he was eight-years-old and especially enjoyed playing songs by The Beatles. In high school he became enamored with British progressive rock bands such as Yes and Genesis, and heavy metal groups (Iron Maiden, Judas Priest), and at 17 started playing electric guitar. But Stubblefield also enjoyed the jazz-fusion stylings of guitarists such as Al Di Meola (“His blending of world-fusion and Latin-rock with improvisation was a huge influence”), John McLaughlin and Pat Metheny. While attending the University of Redlands in Southern California, where he earned BA Degrees in both English and History, he played in a rock band that performed the hits of that era (INXS, U2, Duran Duran, The Cure). In addition, Stubblefield took music classes and jazz guitar lessons. After college he worked at the popular television show Entertainment Tonight for a year in the research department, but was pulled back to music. He quit his job, took an intensive one-year program at the Musicians Institute in Hollywood while interning at a record label and assistant engineering at a recording studio. In 1993 Stubblefield met Waleed Hamad from Kuwait, who played oud (a fretless Mid-Eastern lute) and who had performed with Ben Harper. Stubblefield and Hamad formed a duo, wrote their own material, and began gigging around Southern California. Stubblefield, now back on acoustic steel-string guitar, began absorbing the world music sounds of acts such as Shakti, Strunz & Farah, Paco de Lucia and artists from India and Greece. “Audiences loved our sound and I realized there is a market for world-fusion music.” In 1994 Stubblefield recorded and released his first album. In 1995 he switched to nylon-string Spanish-style guitar as his primary instrument. “I loved the sound and I knew I needed to put my energy into it.” His third album, Rhythm of the Heart, was nominated as “Acoustic Album of the Year” by New Age Voice. His music also appeared on Neurodisc/Priority Record’s compilation CD Pure Flamenco: Nuevo Flamenco Passion. In late 1999 Stubblefield co-founded the Latin guitar oriented world music group Incendio with bassist Liza Carbe and guitarist Jean-Pierre Durand. They soon became a best-selling recording act, a popular concert attraction, and a group whose albums hit the Billboard, NAV and CMJ charts. “Once Incendio got rolling I realized my solo projects were perfect opportunities for me to explore different directions musically. My solo career is a counter-balance to the group. My solo albums have been fairly diverse. I sort of stated my mission with the title of Guitarra Exotica in 2007 because I wanted my guitar to sound exotic but not tied necessarily to one style or culture. That album has some similarities to Encantado because on both I featured Novi Novog playing the viola as a main instrument on many of the tunes, with Randy Tico contributing a lot of fretless bass. Then Inspiracion in 2010 was completely different because it was a very stripped-down recording with just me on Spanish guitar, Randy on fretless bass and Bryan Brock on percussion. On Encantado and Guitare Mystique I purposely went in a different direction with a big sound, full production, a variety of compositional styles, a blend of influences, and exciting interplay between the musicians.” According to Stubblefield, “My solo recordings are my personal vision, generally experimenting within the world-fusion genre, but not always strictly Latin. I take a little more of a cinematic approach on some pieces. Groups like Led Zeppelin demonstrated to me that it’s okay to have some pretty diverse music on each album.”