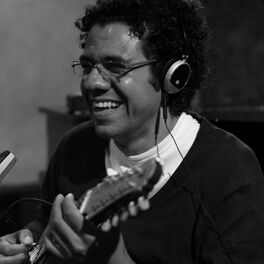 As Favoritas do Diogo Nogueira

Virtuous,brilliant and unique are some of the adjectives to describe this multiple award winning improviser and composer that inspires audiences worldwide. Hamilton de Holanda was born in March 30, 1976 into a musical family. His first instrument was the melodica. He began his professional career as a six-year-old mandolin prodigy on a national TV show with an audience of over 50 million. Toeay, as a composer, improviser, bandleader, educator and master of the mandolin, Hamilton`s music transcends genre. As a prolific performer, Hamilton has dazzled audiences around the world. Hamilton`s music has roots that are fed by the encouragement of his family, by his college degree in composition and by the jam sessions in the streets of the Brazilian capital, Brasilia, where he grew up. His first genre was CHORO, a Brazilian cultural heritage and the cousin of JAZZ. He helped found Club de Choro in Brasilia, one of the first schools of choro. He spearheaded the movement to create a national Choro day in Brazil to expose the Brazilian people to the first music that can truly be called Brazilian. Since 2000, April 23 has been celebrated in Brazil as The Official Choro Day by proclamation of the Brazilian president. Also in 2000, Hamilton reinvented the traditional 8-string Brazilian bandolim (mandolin) by adding a pair of extra strings tuned to low C, giving it a deeper, more resonant voice. This invention, combined with Hamilton's fast solos and improvisations, has inspired a new generation to take up the 10-string bandolim. Hamilton's new ways of playing are grounded deeply in musical tradition, transcending limitation and genres while creating an unmistakable unique voice. Today he travels to the corners of the planet, "bringing his heart to his fingertips" performing his own compositions, even as he challenges himself by experimenting with other musical forms, ensembles and instrumental combinations. He has been invited to be guest soloist Wynton Marsalis and his Jazz at Lincon Center Orchestra and with symphony orchestras around the world. He has been invited to accompany the Dave Mathews Band at the Gorge. He's played on the Summer Stage at Central Park in New York City. He's played in Rio at such events as the Summer Olympic Games and the famous Samba Schools Parade at Carnival. He's played in Paris, Amsterdam, Rome, Los Angeles and other cities and festivals around the world. Hamilton is active on social media where his global numbers are impressive for an instrumental musician. In Brazil he has attained star status, receiving acclaim and countless prizes from critics and peers. He has won several Latin Grammys, many other awards, and countless nominations. This popular support has inspired him to promote social projects like ABRACE, which provides social assistance for children and adolescents with cancer and blood diseases. Hamilton also supports musical programs for children, adolescents and adults from economically disadvantaged areas. (And he has organized several benefits for Brazil's recent dam collapse tragedies.) He understands that the music industry needs definitions for his unique style. He suggests that his music could be called Jazz, Brazilian Jazz, or Brazilian Popular Music. But labels disappear when the music inspires him, springing free without the need to be defined. He likes to explain himself as a musical explorer in search of beauty and spontaneity. Hamilton has share the stage or recorded with Wynton Marsalis, Chick Corea, Dave Mathews Band, Paulinho da Costa, Chucho Valdes, Egberto Gismonti, Ivan Lins, Milton Nascimento, Joshua Redman, Hermeto Pascoal, Gilberto Gil, Richard Galliano, John Paul Jones, Stefano Bollani to name a few.