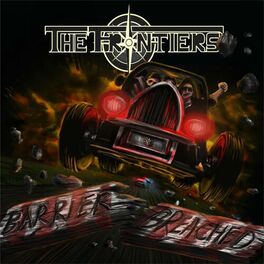 'We are the fucking frontiers, so the limits will be reached' This fragment from their song 'Barrier Breached' is something that The Frontiers certainly live up to. To these young adults from Spijkenisse there is nothing better than playing their heavy music. The power quartet consists of loud frontman, singer and bassist Tim van den Bogaerdt, fast lead guitarist Thijs van der Sluijs, raging rhythm guitarist Romano Romeo and pounding drummer Wouter Michawitz. As inexperienced 13-year-olds The Frontiers formed a cover school band in 2012. Not satisfied with only playing covers, the band started writing original songs in 2017. Since 2018 The Frontiers played big stages as Bernisse On Stage, Spijkenisse Festival and Metropolis Festival. In 2020 the band recorded and released their first record 'Barrier Breached'. After The Frontiers released their album, rhythm guitarist Romano Romeo and new drummer Wouter Michawitz joined the band to form their current line-up. To start off this new chapter, the band played in the finals of Grote Prijs van Rotterdam where they won the audience award! The Frontiers are known for their energetic live performances in which they like to party hard. The quartet likes to joke about how their music could be categorized as fictional genre “Heavy RocknRoll”. Always ready to play, they are guaranteed to kick some ass. Earplugs are advised, because the volume will be turned up to eleven and the ceiling will be blown off!