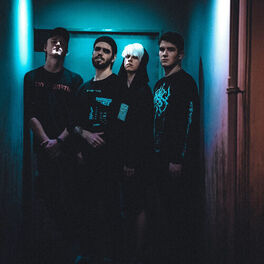 No Trust In Humanity

Welcome to Sortiarius, Planet of the Sorcerers (feat. Silent Generation)

by The Contradiction, Silent Generation

Pesedjet (feat. Diary Of My Misanthropy)

by The Contradiction, Diary of My Misanthropy

The Contradiction is a 3-piece band based in Czech Republic, although some of its members are also from Kazakhstan and Ukraine. It is a mix of progressive metalcore, arab metal and blackened deathcore, with lyrics mostly being inspired by grimdark future of Warhammer 40000 universe.   The band has worked on their music together with such musicians as Dmitry Demyanenko (Shokran), Sergey Raev (Obscure of Acacia, [Amatory]), Jacob Wallace (Brojob) and many others. The Contradiction has also shared the stage with Rings of Saturn (USA), Shokran (RU), Traitors (USA), Lotus Eater (UK) and Marina (CZ) in Europe and beyond.