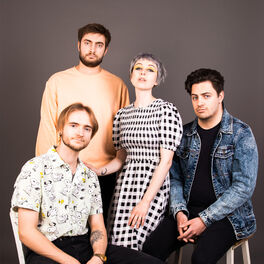 'Stranger Girl brings together pop-rock and 80s-pop with a contemporary indie edge..' - The Other Side Reviews Stranger Girl are a Brighton-based indie pop band. Their first trio of releases came onto the scene in 2019, which saw successes such as features on BBC Introducing South's Track of the Week, and recognition on various popular blogs including Louder Than War and A&R Factory. The band have also seen placements on recognised playlists such as the Spotify curated 'Hot New Bands', and have secured headline spots at gigs across Brighton and London. Taking influence from the likes of Blondie and The Strokes, the band interweave classic indie sounds with the likes of modern nerd-pop outfits such as Indoor Pets and Weezer, with an underlying nod to the pop-punk sounds of the noughties. As a result, Stranger Girl come complete with vibrant and explosive pop melodies, alongside emotionally honest lyrics that explore anxiety, self-doubt and navigating life through your twenties.