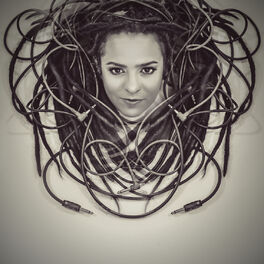 Native to the state of Mato Grosso, she sings, composes, plays, sowing her musical terrain in different soundscapes. Perhaps his first memories are the sound of affection that echoed in the mother's breast and the father's tapping on the tambourine's leather. Graduated in Music at the Federal University of Mato Grosso, she integrated several musical projects working from samba to reggae, from baião to maracatu. A section of his musical work is portrayed in the documentary “Musical Contract” (2015) by Perseu Azul, awarded by the SESC Amazônia das Artes Circulation Award (2016). In 2015, he had a glimpse into his solo career from the Sesc Mato Grosso Music Exhibition, circulating with the show "Somos Som" with musical direction by Nelson Faria. The same show was contemplated by a public notice issued by the Mato Grosso State Secretary of Culture, also guaranteeing the recording of his first album, "Somos Som", with musical production by Gustavo Ruiz.