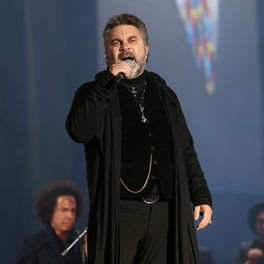 The singer Manuel Mijares was born José Manuel Mijares-Morán in Mexico City in 1958. His first taste of the music business came as a backing singer for the Latin pop star Emmanuel until eventually in 1986 Mijares signed a deal with EMI and launched his solo career. His self-titled debut album released that year spawned a series of international hits including 'Bella', 'Soñador' and 'Poco a Poco'.

A year later he made his big screen debut in the film 'Escápate Conmigo' but subsequent roles in the film industry have been limited to brief cameos. Mijares' golden period has been the 1990s, a decade which began with the singer releasing the album 'Nuda Libertà' (1990) - his only recording in the Italian language. This was followed up with 'Que Nada Nos Separe' (1991) which was the singer's sixth studio album and the one which truly launched his international career, going on to earn him six gold discs.

The singer has now recorded more than 25 hit albums and is one of Mexico's most popular middle-of-the-road artists. His most recent album was 'Canto Por Ti', released in 2013 and went to number one spending a total of five weeks in the Mexican charts.