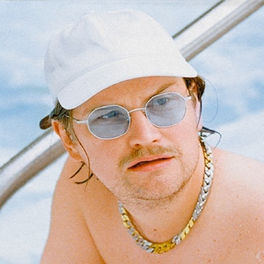 by Slim & The Beast

Myd certainly is a surprising character. That’s because he knows how to do to a lot of different things. With his years of experience, over time he’s captured the art of making you dance in many different ways. For example, he earned his stripes and enjoyed his first taste of international success as part of the band Club Cheval. Next he got us dancing with his producing skills for SCH, Theophilus London and Georgio. But even more so since he joined Pedro Winter’s clan at Ed Banger, who spotted his talent and made his skills shine. In the space of a few EPs and several shows, Myd has found his signature style: that of a meticulous musician who flirts between electro and pop, and whose sound leaves the studio for the club converting us to his concept of partying, whereby having fun means getting sweaty. With his baseball cap and moustache combo, the anthemic tune “The Sun” and his cult-status videos, Myd has sure understood how to unify a crowd of faithful dancers and upbeat party-goers, for whom the night always appears sun-drenched. With every set and every new release, we witness that whatever the fiesta, Myd sure knows how to get it started. Myd is currently working on his debut album and is playing throughout festivals and clubs this summer.