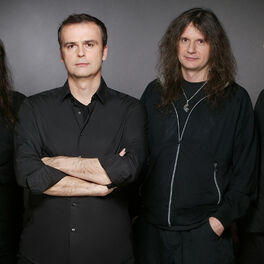 Memories of a Time to Come

Tales from the Twilight World (Remastered 2007)

Imaginations from the Other Side (Remastered 2007)

Live Beyond the Spheres

Beyond the Red Mirror

Blind Guardian are a German metal rock band formed in 1984 with the name Lucifer's Heritage in Krefeld, near Düsseldorf, by vocalist Hansi Kürsch, guitarists André Olbrich and Markus Dörk and drummer Thomas Stauch. Singer Thomas Kelleners joined briefly and the line-up has varied since. Current members are Kürsch and Olbrich plus guitarist Marcus Siepen and Frederik Ehmke on drums.

Their 2010 release 'At the Edge of Time' reached number eleven on Billboard's Hard Rock Albums Chart. 'Memories of a Time to Come' (2012) went to number six on the Germany Albums Chart and 'A Traveler's Guide to Space and Time' (2013) peaked at number eight. 'Beyond the Red Mirror' (2015) went to number four in Germany and number five on the Hard Rock Chart with 'Live Beyond the Spheres' (2017) peaking at number nine in Germany.