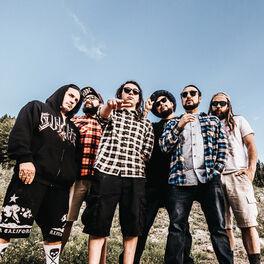 Tribal Seeds has toured the world over seeking the spiritual aromatics of earth smoke and forming bonds with fans and musicians. In their 15 years as a reggae rock band, originally from San Diego, Tribal Seeds has released four full length albums and two EPs. It’s helped them amass over 235,500 followers on Spotify. They matched that output and strong fan connection with a robust touring life that brought the group to Europe, South America, New Zealand, Mexico, Guam and Aruba. With the global pandemic ending all tours worldwide, the band was sidelined for 2020, which has led to a special live album experience to adapt to the times. Tribal Seeds’ Live: The 2020 Sessions will be remembered in reflections of the disruption that a global pandemic caused to large, joyous gatherings, and the resilience of musicians to maintain a connection to sequestered fans. Recorded and self-produced over three days in a private venue with cameras rolling, The 2020 Sessions was released as a live Youtube experience on November 19, 2020 with the album version following the next day across all streaming platforms. The 2020 Sessions is bold new territory for Tribal Seeds. From the outset “Down Bad Vibes” leads the record, an unreleased song that will be on their forthcoming studio album. “Down Bad Vibes” is a heavy, traditional reggae dub with live horns and signature space echo. It feels like a ceremonious cleansing of the space that curates the room for new songs: “Lift,” “Tempest,” “Sekkle & Cool,” and “Fallen Kings.” The song “Fallen Kings” finds the group implementing live string arrangements into their sound, all of which suggests they’ve utilized the downtime to explore and push themselves creatively in the studio for the next record. It’s an exciting progression for a group that rose to the top quick and has remained on the road for over a decade. The group’s ascension among the elite in the roots and reggae rock genres came within its first three years as their self-titled 2008 album debuted at #1 on the iTunes Reggae charts, as well as winning the San Diego Music Awards honors of Best Reggae/World Album. The single “Dawn of Time” remains one of the group’s highest streamed songs with nearly 30 million Spotify plays. Since then, each consecutive album has debuted at #1on iTunes with The Harvest LP cracking the Top 5 on Billboard Reggae and the Soundwaves EP debuting #2 on Billboard Reggae. Finally 2014’s Representing debuted at #1 on iTunes, Amazon and Billboard Reggae charts, while the single “Moonlight” garnered over 13 million Spotify plays to date. The Roots Party EP in 2017 continued to push the band’s ascension as the group dynamic evolved and grew along the way. Brothers Steven Rene Jacobo (lyrics, vocals, guitar) and Tony-Ray Jacobo (producer) make up the remaining original members, while the group has expanded to include Victor Navarro (bass), Ryan Gonzo (guitar, vocals), Luis Castillo (keyboard, vocals), Daniel Lopilato (keyboard, vocals) and Jamey "Zeb" Dekofsky (drums). Tribal Seeds is expected to finish and release their next record in 2021. The group enlisted legendary reggae producer/engineer Fabian Cooke in the studio after building a relationship while recording the Roots Party EP.