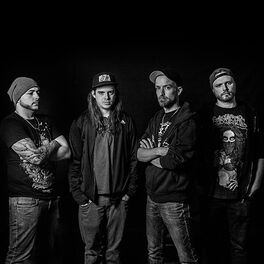 The Battle of Metal, Vol. 5

The Battle of Metal, Vol. 6

The Battle of Metal, Vol. 4

Imagine LIMP BIZKIT, BIOHAZARD, SLIPKNOT, CLAWFINGER and SICK OF IT ALL would spent a holiday in Switzerland to produce a new album together. It would surely be a dream that is coming true for every fan of 90s Nu Metal/Rap Metal and modern Hardcore Metal. What if we would tell you, that this dream (nearly) became true and that the new album “Hypocritical” of the swiss band SICKRET sounds exactly like this? Hard and merciless the riffs are hammering their way through the Swiss Alps: Since the founding of the band in 2010, SICKRET has played over 100 shows in 6 countries, where they convince their fans with dynamic songwriting and awesome stage presence. SICKRET are masters of the Nu Metal-, Crossover- and Hardcore-Genre, and show the audience how this mixture should sound nowadays. After their success in the “KUFA Hardcore CUP”, where the four guys won against numerous other bands, more concerts were following, where SICKRET were sharing the stage with bands like SICK OF IT ALL, PRO PAIN, SKINDRED, BREAKDOWN OF SANITY, ABORTED, FIRST BLOOD and more. After the band released their debut-album “Pointless Appendix”, which was widely appreciated, SICKRET received an EMP Support-Deal in 2014, and, only one year later, a tour in Cuba and a tour in Eastern Europe was following, just like many single shows inside and outside of Switzerland.