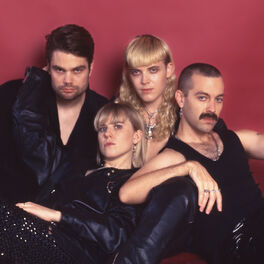 This Is Our Vice

Break Me Down (with Mallrat) (Northeast Party House Remix)

I Never Cried So Much In My Whole Life

Mine / What If He Put His Hands on You

Offering a buoyant variety of indie pop that stresses the pop, Cub Sport (briefly Tim Nelson & the Cub Scouts, then Cub Scouts) hail from Brisbane, Australia. With guitarist Zoe Davis, keyboardist Sam Netterfield, and drummer Dan Puusaari, the band was founded in 2010 by singer and main songwriter Tim Nelson. Nelson started piano lessons as a six-year-old and began writing songs in high school, where he met his bandmates. The title track from their 2012 debut EP, Told You So, earned Cub Sport an enthusiastic audience centered around college radio in the U.S., as well as their native Australia. A second EP, Paradise, appeared a year later, and tour dates and music festival appearances in North America, Europe, Asia, and Australia followed. Another EP, Only Friend, was issued in 2015 by Nettwerk, with a handful of EP tracks appearing on the band's full-length debut, This Is Our Vice, which arrived in March 2016. Cub Sport recorded their second album at Nelson's home with him in the production chair. Calling it a personal album inspired by growth, BATS was released by MGM in 2017. A year of heavy touring followed, as did the release of singles like "Sometimes" and "Summer Lover," both of which appeared on the band's eponymous third album in January 2019. ~ Marcy Donelson