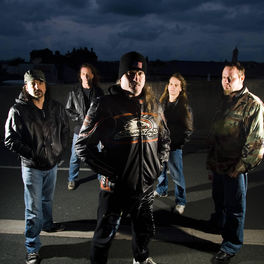 The Crucible of Man - Something Wicked (Pt. 2)

Night Of The Stormrider

Festivals of the Wicked (Live)

Something Wicked This Way Comes

The Blessed And The Damned

Inspired by the ear bleeding thunder and hard thrashing glory of early classic metal acts such as Iron Maiden and Black Sabbath, Iced Earth have become longstanding cult heroes of America's hard rock scene since coming together in Florida in 1985.

Front man Jon Schaffer originally fell in love with music after going to a Kiss gig with his dad at 11-years-old, and started out playing in bands as a way of rebelling against the strict regime of his Lutheran school teachers in Indiana. At 16 he fled to Tampa Bay after the death of his best friend and he found work as a roofer, before forming Iced Earth to play in local clubs and bars. They built up a reputation for growling, bombastic metal and complex, prog rock theatrics, and really hit their stride with '90s albums 'Burnt Offerings' and 'The Dark Saga' (a concept album based on Todd MacFarlane's anti-hero comic book 'Spawn'). Singer Matt Barlow left the band after the 9/11 attacks to become a police officer, but with former Judas Priest front man Tim 'Ripper' Owens taking his place they released the sprawling epic 'The Glorious Burden' and the mighty 'Framing Armageddon'.

Schaffer's knowledge of American history and his belief in the country's independent, libertarian, anti-authoritarian spirit have been constant themes throughout his songs and, although several band members have come and gone through the years, their sound has remained resolutely loyal to the roots of classic heavy metal. Supported by a loyal following across the world, the addition of Canadian vocalist Stu Block in 2011 took the band into a new era, and they made the US top 50 for the first time in 2014 with their 11th studio album 'Plagues of Babylon'.