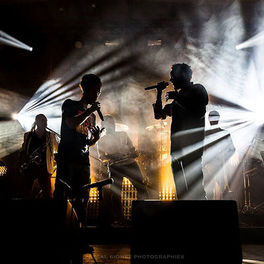 Danakil was formed in 2000. It all started when eight friends from the Parisian area met to share their common passion for reggae music. Quickly after, the group began playing on local stages, having already set the basis of their musical identity which they’ve never stopped developing since then. In 2006, after about a hundred of concerts, Danakil recorded its first album which was auto-produced : «Microclimat». This album is a collection of the key songs Danakil had been playing since its creation, the ones that attracted its loyal and ever-growing audience. The success of this first opus marked the end of their associative era and showed the way to a more professional status. They came across several decisive opportunities to build their network of contacts and helped them develop their programming system. Today, after more than 300 concerts on their list, Danakil has proved to be a real live group, carried by a collective and communicative energy and an ever-extending charisma. In 2008, strengthen by its acquired experience; Danakil went back to the studio to record its second album. «Dialogue de sourds» («Dialogue of the deaf»), as it is called, is a stunning mix between reggae /roots and modern tones. Along the 12 songs, Danakil keeps on observing and pointing out the issues of the evolving society. Real musical testimony, the album sticks to their protesting and committed style that carried «Microclimat» to its great success. Several famous artists participated to its production such as the mythical trio of the Mighty Diamonds, the English MC General Levy or the Jamaican toaster Jah Mason. Since its release, the band has multiplied the number of concerts all over France and can now be counted as one of the most active groups on the French scene. Danakil recorded its first album «Live» on the 26th of November 2008 at the Cabaret Sauvage in Paris; a CD/DVD of this event has been made available since the 3rd of April 2009. That concert was a great success and gave two full hours of sound capturing, four hours of images with additional bonuses filmed behind the scenes. In 2011 they came back with «Echos du Temps» recorded between Paris, Kingston & Bamako with featuring such as U-ROY , Winston & Matthew Mc Anuff, Natty Jean.