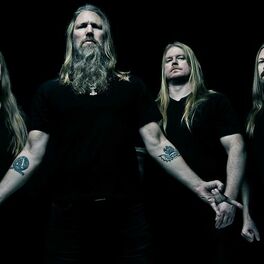 The Pursuit of Vikings (Live at Summer Breeze)

Deceiver of the Gods

Under the Influence - EP

Versus the World (Bonus Edition)

Once Sent From The Golden Hall (Bonus Edition)

Twilight Of The Thunder God

Once Sent From The Golden Hall

2019 saw the release of Amon Amarth's eleventh studio album, 'Berserker'. The album took the band in a different direction as they began to explore other elements of their signature Viking-inspired style and includes tracks 'Raven's Flight' and 'Crack the Sky'. Their 2019 schedule was to include a supporting slot on Slayer's last world tour alongside Lamb of God and Cannibal Corpse before embarking on their own tour of North America with Arch Enemy, At the Gates and Grand Magus.