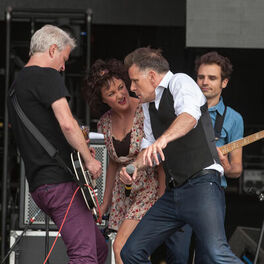 Live at the Glasgow Barrowlands

Whatever You Say, Say Nothing

When the World Knows Your Name

Dignity - The Best Of

Essential - One For The Lads

Put Your Foot Down And Drive

A finely crafted, melodic band, Deacon Blue enjoyed a run of major success through the 1980s which established them at the heart of the new wave of Scottish rock - bracketing them with Wet Wet Wet and Hue and Cry.

Former teacher Ricky Ross put the band together with singer Lorraine McIntosh, whom he subsequently married, and released their acclaimed 1987 debut album 'Raintown', a concept album of sorts about down-trodden life in Glasgow which included the singles 'Dignity', 'Chocolate Girl' and 'Loaded'. It was the follow-up 'When the World Knows Your Name' in 1989, however, which gave them their biggest commercial success, generating their biggest hits 'Fergus Sings the Blues', 'Real Gone Kid' and 'Wages Day'.

While remaining a popular live attraction, sales of subsequent releases declined and the band split up in 1994. They reunited with the album 'Walking Back Home' in 1999 and 'Homesick' in 2001 and still occasionally perform together, while the two founders formed a duo on the side called McIntoshRoss and released an album called 'The Great Lakes' in 2009 as well as two solo offerings that came from Ross in 2002 and 2005. Brand new album 'The Hipsters' was released in 2012 and prompted a 25th anniversary tour and further new material - 'A New House' was released in 2014 followed by 'Believers' in 2016 and 'City of Love' in 2020.