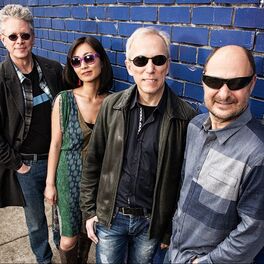 Sunrise of the Planetary Dream Collector

The Best Of Philip Glass

The Company - A Robert Altman Film

Throwing off the shackles of traditional chamber music, Kronos Quartet have been pushing the boundaries and reinventing classical arrangements in a more modern way for over 40 years. Taking their name from a Greek God, the string quartet - led by violinist David Harrington - settled in San Francisco in 1973 and started out playing in clubs rather than the traditional concert halls. They broke with convention by performing Jimi Hendrix's 'Purple Haze' and tracks by artists as diverse as Television, Bob Dylan and Sigur Ros, as well as collaborating with poet Allen Ginsberg and Romanian gypsy band Astor Pizzolla.

Their breakthrough album 'White Man Sleeps' in 1987 led to them commissioning over 750 new compositions from up and coming composers and releasing more than 40 albums with sales in excess of 1.5 million. Always keen to explore different genres and styles, they have worked with everyone from David Bowie, Bjork and Tom Waits to contemporary composers such as Philip Glass and Henryk Mikolaj Gorecki, and even African world music star Rokia Traore, Inuit throat singers and traditional musicians from China, India and Afghanistan.

Still as inventive and groundbreaking as ever, they recorded soundtrack music to the films 'Heat' and 'Dracula' and won a Grammy Award in 2004 for the album 'Alban Berg: Lyric Suite'. To mark their 30th anniversary in 2003, Kronos commissioned young composers under the age of 30 to write music for them, with the aim of getting their talent noticed. Ten years later, after another successful decade of touring and expanding their repertoire, Kronos Quartet returned to their native Seattle to collaborate with the Degenerate Art Ensemble on a work that would incorporate music with video and dance. They performed together at the Zellerbach Hall in Berkeley in December 2013.