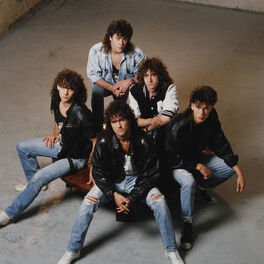 I Want You to Hear

Beneath the Shining Water

Arc of the Dawn

Out of the Silence II Anniversary Special Edition

Calm Before the Storm 2

Out Of The Silence

After legendary Dublin band Thin Lizzy split in 1983, keyboard player Darren Wharton turned up the smoke machines, unleashed the squealing guitar solos and roaring riffs and embraced the hard rocking, heavy metal scene and started new group Dare. Returning to his hometown of Oldham, Lancashire, he took on vocal duties and recruited Vinny Burns on guitar, Martin Shelton on bass, James Ross on drums and keyboardist Brian Cox, who would later find fame as a world-renowned physicist and host of numerous TV science shows. Full of stadium-busting, anthemic power, their early albums Out Of The Silence and Blood From Stone were released through A&M Records and became popular across Europe, but as the '90s kicked into full Brit pop mode, their soaring melodic rock was left behind. Relocating to Wales, they adopted a more earthy, Celtic sound on their fourth album Belief and influential BBC2 radio host Terry Wogan became a fan, playing their single White Horses regularly on his show. Wharton returned to touring with Thin Lizzy in the '90s, but continued to work on Dare material and released the band's eighth studio album Sacred Ground in 2016.