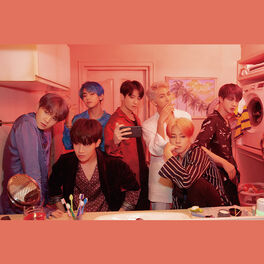 MAP OF THE SOUL : PERSONA

Love Yourself 承 'Her'

The Most Beautiful Moment in Life: Young Forever

The Most Beautiful Moment in Life Pt.2

The Most Beautiful Moment in Life Pt.1

Their name translates as Bulletproof Scout Boys and in just a short space of time the Bangtan Boys have achieved great success. The first members of Bangtan Boys were found through auditions held by South Korean record label Big Hit in 2010. As they built their reputation, putting out messages and news of the band through online platforms, they released their debut album 'Dark & Wild' in 2014. Later the same year they released 'Wake Up', an album of Japanese versions of their songs as well as brand new Japanese tracks. Korean album 'Wings' came in 2016 with the Japanese album 'Youth'. The band toured extensively to promote their albums, including playing sets at festivals and in 2017 embarked upon their BTS Live Trilogy Episode III: The Wings Tour. They were awarded the Top Social Artist Award at the 2017 Billboard Music Awards, becoming the first Korean group to scoop one of the accolades. They released their fifth album 'Love Yourself & Her' later in the year which included a collaboration with Andrew Taggart of The Chainsmokers. Artist biography compiled by BDS/West 10. All rights reserved