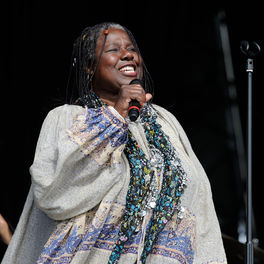 Through The Eyes Of Love

Now We May Begin

Don't Say It's Over

An elegant soul star with a velvet voice and humble personality, Randy Crawford scored a string of timeless pop hits in the late 1970s/early 1980s and drew comparisons with the likes of Billie Holiday, Ella Fitzgerald and Donna Summer. Starting out singing in Cincinatti nightclubs when she was just 15-years-old, Crawford made her name performing in New York with jazz legends George Benson and Cannonball Adderley and released her debut album Everything Must Change for Columbia Records in 1976. As vocalist for The Crusaders, her disco soul classic Street Life became a hit across Europe in 1979 and was later used in Quentin Tarantino's movie Jackie Brown, while breakthrough album Now We May Begin (1980) made the UK Top 10. The slow, dreamy ballad One Day I'll Fly Away became another signature hit (covered by Nicole Kidman in the film Moulin Rouge) reaching Number 2 in the UK, and albums Secret Combination (1981) and Windsong (1982) continued the run of success. Crawford went on to work with Eric Clapton, Steve Hackett and Rick Springfield, and rekindled her partnership with Crusaders keyboard player Joe Sample on later albums Feeling Good (2006) and No Regrets (2008).