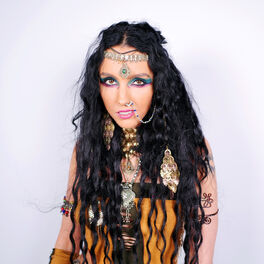 Light of the World (Club Mixes)

Light of the World

Is Everybody Searching (Club Mixes)

Nathassia is a Dutch-born singer, songwriter and electronic music artist currently residing in London, UK. She has been described as "The new face of dance culture”, "This generations Kate Bush” and a reinventor of the genre electronic music. Born and raised in Gouda,The Netherlands, with a Dutch father and Indian mother (raised in Surinam, South-America) she grew up absorbing many multicultural musical influences. Mauritius Times said about Nathassia: “She is a role model for multiculturalism”. Nathassia made history as being the first electronic music artist to perform at Valley of the Kings in Luxor Temple, Egypt at the Nefertiti International Fashion Festival. Nathassia was featured on the Channel 4 TV show The Casting Couch. On Summer Solstice day 21st of June 2018, Nathassia released her second album Devine Sunrise, produced with Pete Ardron. In an interview The Yorkshire Times described Nathassia as "With a sound that borrows from a whole world of music, she is impossible to define in just a few words. As her sound travels from continent to continent, her powerful stage presence and distinctive styling make her a truly unforgettable artist." Nathassia's debut studio album, Light of the World was released on the 30th of March 2017 by Inter-dimensional Recordings. Nathassia co-produced the album with some of the UK’s leading underground electronic music producers including British Dubstep producer Stenchman and chose to write several songs with Grammy award winning writer/producer Bruce Elliott-Smith. Multi-million selling Universal A&R Eddie Gordon described the album Light Of The World as "Unique song creations that show a connection to something much higher than the normal mind”.