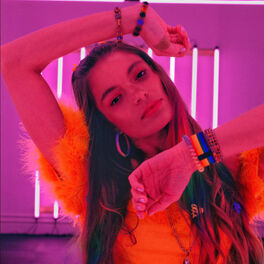 Now You See Me

Shadow of the Sun

Over Getting Over You

Lighten Up / Catch and Release (Stripped)

Music You Should Know

In 2020, New York native Molly Moore’s music became a colorful comment on the dichotomy of real and ideal, true and fake. As social media begs us to show off our most agreeable angles, Molly warps the internet to instead mirror her humanity. “Self reflection can be hard, especially in a time when everyone wants to filter the best part of their story forward,” Molly says. “But I try and find power in confronting the less comfortable things." Molly Moore’s solo career in pop has a defenseless, upbeat spirit that reflects the 90s from the lens of the future. Her live shows are a cathartic, edgy experience, bridging powerful beats with dynamite vocals and lyrics. Molly’s newest track, ‘In Real Life’ will be the first off her forthcoming album, including productions by The Monarch (Rita Ora, Justin Bieber, Cher) and Louis & Mike Biancaniello (Aretha Franklin, Whitney Houston, Kelly Clarkson). The talented musician/actress began penning lyrics at the age of five, singing by age eight, and auditioning for on-screen roles by age ten. At 19 Molly moved to California, finding herself writing behind the scenes for artists such as Jesse McCartney, Steve Aoki, EXO, and Lea Michele. Molly’s voluminous experience as a pop writer and performer comes in part from her past-life in the duo Cosmos and Creature. This project with her ex-boyfriend, Brandyn (EMAN8), gained organic, electric success and brought her to stages like the Troubadour, iHeart Radio, the Roxy, and many more. Their 2016 single ‘Young’ hit #1 on the global viral chart, #2 on Spotify’s US viral chart, and #2 on Hype Machine. When the couple broke up in 2019, Molly realized that despite it all, she hadn’t been fully honest with herself. Just before the six-year relationship ended, Molly’s father and musical champion, Cory, passed away. The devastation put Molly in a spin. “He is the reason I wanted to make music.” A songwriter himself, Molly’s father taught her piano, guitar, and composition. “He was the hardest worker and never gave up on the dream. It was a beautiful thing to witness.” Dealing with the grief of the last few years has instigated a fire in Molly to live her life fully. She made the decision to start a new relationship: with herself and with her music. Molly has music videos and a tour lined up for 2020, along with the release of her full-length album. “No more highlight reels,” She shares. “You have to get up every single day and live how you wanna be. There’s just no time to wait to be you or to live your dreams.”