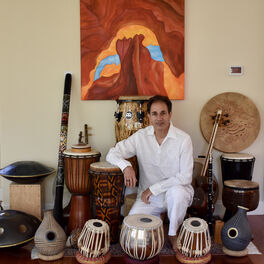 Nadar Vasseghi is a multi-instrumentalist, author, speaker, executive coach, entrepreneur, and sound healer who uses his unique blend of new age, world music, and meditative influences to create immersive soundscapes conducive to holistic peacefulness. Nadar’s career path initially led him in professional directions other than music, but he eventually came full circle in a manner that only his unique experiences could design. After Nadar finished high school, he traveled to America, where he received his undergraduate degree in Electrical Engineering from the University of California Santa Barbara, before moving to England to earn a Master of Electronics from Southampton University. Following his degrees, Nadar began working in Silicon Valley, at first in technical roles, then rising through senior management roles, and eventually starting his own successful company, which was later acquired by Cisco where he led a business unit. All through this time, his passion for music accompanied him as a constant muse and motivator for him to seek ways to pursue creativity and beauty. In 2016, this creativity came to a head in the form of Cnergist, an executive coaching firm founded by Nadar. Through Cnergist, Nadar has been able to pursue his creative passions and has developed as an author, speaker, workshop leader, energy medicine practitioner, and sound healer. He stewards these abilities to walk alongside business leaders and high achievers as he guides them to bring out the fullness of their creativity and achieve work-life harmony. Here, his musical abilities and business experience meld together in a way that seeks to help those around him.