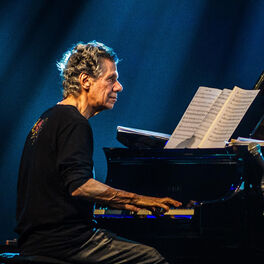 The Trio: Live From The Country Club

From Nothing: Solo Piano

The Definitive Chick Corea on Stretch and Concord

Learning to play the piano at just four-years-old, Chick Corea cut his teeth by working with Stan Getz and Herbie Mann and became a key member of Miles Davis' group, playing on the legendary albums 'Filles de Kilimanjaro' (1968) and 'Bitches Brew' (1969), which helped take jazz into an ever more avant-garde, free-form and psychedelic territory.

He delved into acoustic jazz with the quartet Circle and formed the Brazilian/Latin inspired group Return to Forever, winning the first of 18 Grammy Awards for the album 'No Mystery' in 1975. Corea's experimental playing style is notable for its use of electric keyboards and synthesizers, and as a band leader he has produced over 100 albums including the acclaimed 'The Leprechaun' in 1976, 'Friends' in 1978 and 'The New Crystal Silence' in 2008. He remains renowned for his signature composition 'Spain' and has become one of the most influential and studied musicians, noted for his role in creating electric jazz fusion and expanding the realms of the genre. He created a new band Chick Corea & The Vigil in 2013 and celebrated his 75th birthday by playing a marathon of six weeks at the Blue Note Jazz Club in New York, accompanied by 20 different groups.