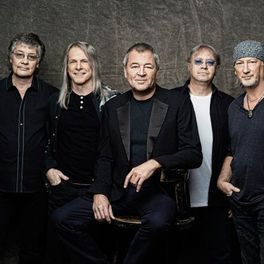 A Fire in the Sky

All I Got Is You

From the Setting Sun... (In Wacken)

To the Rising Sun (In Tokyo)

Deep Purple are an English rock band that formed in Hertford, England in 1968. Originally comprised of vocalist Rod Evans, guitarist Ritchie Blackmore, bassist Nick Simper, drummer Ian Paice and keyboardist Jon Lord, the band would become famous for its frequent member changes, with each individual line-up being referred to with a 'Mark' number. Three albums were released under the Mark I line-up, which was succeeded by Mark II in 1969 when Evans and Simper were replaced by Ian Gillan and Roger Glover. This line-up remained until 1973, when Gillan and Glover left the band to pursue solo projects.

Mark III and IV released three studio albums between them, and the band went on hiatus following Tommy Bolin's death from a drug overdose in 1976. In 1984 the band reformed with Gillan and Glover to resurrect the Mark II line-up, which released the platinum album 'Perfect Strangers'. Internal disagreements resulted in Gillan's second exit from the band, and upon his return in 1990 Blackmore was replaced first by Joe Satriani and then permanently by Steve Morse. Minor rearrangements continued throughout the 1990s and early 2000s to leave the current Mark VIII line-up of Gillan, Morse, Glover, Paice and Don Airey.

Deep Purple are widely considered as key pioneers of modern rock and metal, and have sold over 100 million albums since their conception. Four years after the death of Jon Lord in 2012, the band announced their 20th album was to be titled 'Infinite' and be accompanied by the Long Goodbye Tour. Although there was no official announcement that the tour would be their last, Paice stated that it would probably be their last big tour.