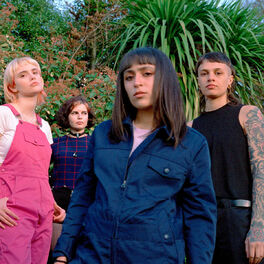 Four-piece ĠENN (pronounced Jenn) kicked off 2021 with the release of singles Feel and Mackerel’s Funky Mission from their newly released EP, Liminal (March 30 via Everything Sucks Music). The band have received consistent support from BBC6 Music, XS Manchester and Amazing Radio, Radio X playlisted both singles released this year and the band had an Isolation session with John Kennedy on April 02. Should live go ahead as planned, ĠENN are booked to play several tastemaker festivals including Focus Wales, Kendall Calling, and Loud Women. They have a sold out, socially distanced show at MOTH Club in June and were featured in The Great Escape's First Fifty announcement in November 2020, and will be part of this year's online showcase event. Leona (vox), Janelle (guitar) and Leanne (bass) are originally from Malta and moved to the UK to complete their lineup with drummer Sofia. ĠENN have toured extensively across the UK and Europe, including support for Acid Mothers Temple, Honeyblood and The Orielles.