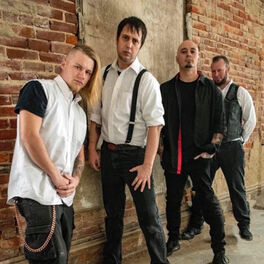 The Indifference of Good Men

Angel on the Outside

A Killer's Confession, the band, led by vocalist Waylon Reavis is back with their much-anticipated sophomore album, "The Indifference Of Good Men." AKC has constructed one of the most high octane, adrenaline fueled, gut wrenching albums of the year. "The Indifference Of Good Men" is equal parts beauty and tragedy and takes the listener on a journey to the edge of insanity and back. Preorders are being accepted at https://orcd.co/y8a2210. "The Indifference Of Good Men" was produced by Sahaj Ticotin (Starset, Sevendust) in Los Angeles, CA. The album is scheduled for release October 18th via Wake Up! Music Group. Formed in 2016 in Cleveland, OH, A Killer's Confession (AKC) is led by vocalist Waylon Reavis and consists of Morgan Bauer (drums), JP Cross (bass), and Mark Alexander (guitar) and Brock Star (lead guitar). The debut album from AKC "Unbroken" was released on May 12th, 2017 via EMP Group, the label founded by Megadeth bassist Dave Ellefson. The ﬁrst single "A Killer's Confession" featured Korn guitarist Brian "Head" Welch. After the contract term ended with EMP Group, the band self released their next three singles ("Angel On The Outside," "I Wish" and "Reanimated") all to critical and commercial acclaim, racking up over 2 million cumulative streams on Spotify. In 2019, Pepper Gomez, the founder, and CEO of Chicago and Miami based Wake Up! Music Group signed the band. The album's ﬁrst single "Numb" was released as the lead single on September 20th. http://www.akconfession.com/ https://www.instagram.com/a_killers_confession/