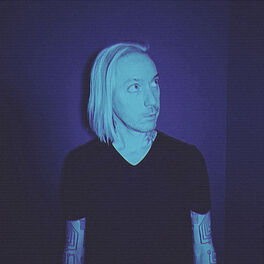 B-Sides and Other Things I Forgot

Regarded for his slick, genre-bending electronic rock, Bret Autrey -commonly known as Blue Stahli -produces cyberpunk anthems of the fringe zeitgeist. Bret returns to his tracking roots, using modern tracker Renoise to craft the newest iteration of the Blue Stahli sound -the deadchannel_Trilogy. His latest music is a window into his journey through being his mother’s caretaker as she battled malignant brain cancer & mourning his biggest champion after she passed away in 2018 while further reconnecting with his family origins after losing a major cornerstone. The deadchannel_Trilogy of Quartz, Copper & finally Obsidian, travels through a life change, processing & internalizing these moments, defining Bret as a person after being broken down & starting anew. Like the crystal, Quartz is a translucent album -there is confusion & uncertainty but youcan hear & see through the songs a haziness of the 90s, with cyberpunk elements, unintentionally playful & even comicbook-like. Copper achieves an experimental soundscape, like the malleable metal, takes on a serene, dreamlike illusion. Finally, Obsidian -a black hole coming to a final, abrupt halt. After trekking through dark valleys & open skies, the volcanic lava hardens as it cools, felt with the increased raucous percussive bangs & angry guitars. But it all comes to a breath & lingering hope where listeners are reminded that the brittle obsidian rock has a glassy sheen & that life shines on despite the darkness.