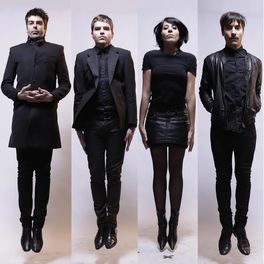 I Need Space To Breathe

Speak To Your Soul

Next To Me (Remixes)

Part of a new generation of DIY bands who emerged in Barcelona in the mid-2000s, Dorian set out to meld the city's vibrant dance music with the rock groups of the '80s and '90s which front man Marc Gili had grown up with. Taking inspiration from the likes of New Order, The Cure and The Killers, their keyboard-driven, electro-indie grooves helped make their 2004 debut album 10,000 Metropolis an underground favourite and they toured extensively across Europe, including spots at Primavera and Sonar festivals. Choosing to sing in Spanish like their heroes Radio Futura and Nacha Pop made it harder for them to break through in the UK and America, but albums El Futuro No Es De Nadie (The Future Belongs To No One) and La Ciudad Subterranea (The Underground City) became popular in Colombia, Argentina, Chile and particularly Mexico, where they became leading stars of the independent music scene. Their status grew further when a trilogy of music videos made by producer Crampton featured their tracks La Tormenta De Arena (The Sandstorm), Paraisos Artificiales (Artificial Paradises) and La Manana Herida (Morning Wound) went on to attract more than 34 million views on YouTube. Their synth-pop melodies continued to shimmer and swell on 2013's La Velocidad Del Vacio but, after celebrating a decade together, a different side to them emerged as they introduced a string section into the mix on the 2015 album Ten Years and One Day.