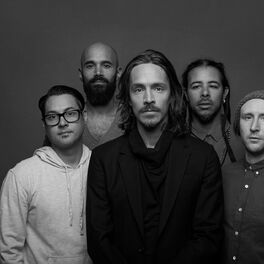 Trust Fall (Side B)

Trust Fall (Side A)

If Not Now, When?

A Crow Left Of The Murder...

Wish You Were Here

Still Not a Player EP

Stealth-Music from the Motion Picture

Originally formed at school, Incubus started playing at legendary Los Angeles clubs the Roxy, the Whiskey and the Troubadour while still in their teens before heading out on tour with Korn, Primus and Sublime. Pioneers of an alternative metal scene incorporating elements of funk and hip-hop, early albums 'Fungus Amongus' (1995) and 'S.C.I.E.N.C.E.' (1997) were small underground hits, but it was the success of US top ten single 'Drive' from third album 'Make Yourself' in 2000 that really put the band on the map.

Their fourth album 'Morning View' in 2001 embraced a more emotional side to their songwriting, soaring with heartbreak and melancholy all the way to number two in the US and producing their biggest UK hit 'Are You In?'. 2004's album 'A Crow Left of the Murder...' hit the same mark, before the band's loyal fan base sent 2006's 'Light Grenades' straight to the top of the US charts. They went on hiatus in 2008 as individual projects and home lives took over the bulk of their time, but they ensured that they would stay in the hearts and minds of their fans with the release of a greatest hits album titled 'Monuments and Melodies' in 2009. Brand new singles 'Black Heart Inertia' and 'Midnight Swim' featured on the album as well as a cover of the Prince hit 'Let's Go Crazy'.

2011 saw the release of 'If Not Now, When?', an album of brand new tracks including the lead single 'Adolescents', and the announcement of a world tour. In 2012 they co-headlined the Honda Civic Tour with Linkin Park, after which they took another break. Their eighth album '8' was released in 2016 and was followed by a 2017 tour with Jimmy Eat World. During their US tour to celebrate the 20th anniversary of breakthrough album 'Make Yourself', the band released the single 'Into the Summer' followed by 'Our Love' in 2020.