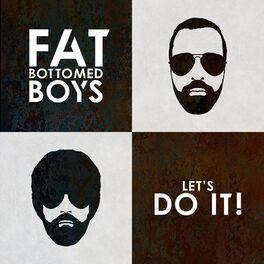 Fat Bottomed Boys, that name sounds familiar, right? It’s probably because it’s based on a famous song by Queen and its late singer Freddie Mercury. The Sgt. and Elash, the two founders of this French duet based in Lille (North of France), wanted to pay a claimed tribute to their idols writing original materials heavily inspired and arranged "à la" Queen. The album, called « Let's Do It! », released on September 5th when Freddie Mercury would have celebrated his 74th birthday, combines 10 songs trying to sum up the great variety of styles the British band has explored during its more than 20 years long career : from sheer rock anthems to sexual funk, lovely ballads and funny vaudevilles. The first single Just a Moment and its accompanying video is released on July 17th 2020. Queen fans are immediately seduced by its feel good vibe. It is a fresh rock song giving an a overview of the energy Fat Bottomed Boys is capable of deploying on stage. As a second single, Wait for Me is a powerful ballad reminiscent of some complex Mercury’s songs. It’s released on August 9th 2020 along with its self-produced video. We could count more than 40000 views to this day between YouTube and Facebook. The Fat Bottomed Boys are eager to play their new songs on stage “in real life” and to meet their new audience, as soon as possible.