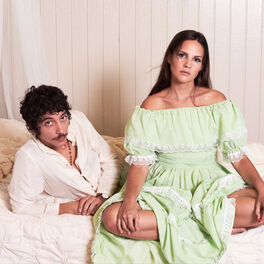 On repeat by Antoine

Like generations of Puerto Ricans before them, Raquel Berríos and Luis Alfredo Del Valle of experimental pop duo Buscabulla (slang for “troublemaker”) moved to the mainland United States to hustle for their dreams, but a longing for their island ran deep, never escaping their thoughts during the decade they resided there. It was in New York City that the Buscabulla sound was forged, elevated bedroom productions and unique juxtaposition of stylistic highs and lows: Raquel’s textured, high-pitched vocals counterpointed by Luis Alfredo’s poignant bassline; minimalist melodies that evoke throwback salsa and R&B and whispery re-imaginings of catchphrases from 90s reggaeton and every-day island vernacular. Buscabulla’s first two releases, EP I (2014), produced by Dev Hynes, and EP II (2017), garnered attention and a growing international hunger for the band. However despite their growing successes, in early 2018, in the wake of Hurricane María having wreaked havoc on an island already immersed in economic disarray, Raquel and Luis Alfredo’s longing for their native home became too much to ignore, and they made the decision to move back to Puerto Rico. It was in this context and during this transition that Buscabulla wrote their first album, Regresa. Full of angst and an underlying sense of loss, Regresa, which means “return”, is a bittersweet, introspective, eye-opening journey. Buscabulla calls for self-reflection, awakening and perseverance in the midst of an uncertain future.