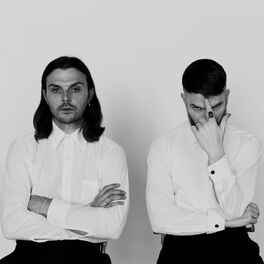 Somebody to Die For

Hold on to Me

With their slicked-back hair and sharp dress sense, Hurts looked like a couple of leftovers from the 1980s new romantic scene when they first appeared in 2010, complete with their distinctive brand of soaring synth pop. Formed when Theo Hutchcraft and Adam Anderson met while their friends were having a fight outside of a Manchester nightclub; rather than exchanging blows the pair got talking about music and started exchanging lyrics and tracks via email. After years spent on the dole and the failure of previous bands Bureau and Daggers, the duo started writing mournful ballads and gothic pop songs and made a video for their track Wonderful Life which became a huge viral success with over 21 million views on YouTube. Signed up by RCA, debut Happiness (2010) featured a track with Kylie Minogue and went on to reach Number 4 in the UK album chart as the band were named Best New Act at the NME Awards and became acclaimed across Europe for their retro, electro-pop melodies and grand, romantic odes to everyday heartache. Led by single Miracle, follow-up Exile (2013) offered more of the same as the band's popularity continues to grow.