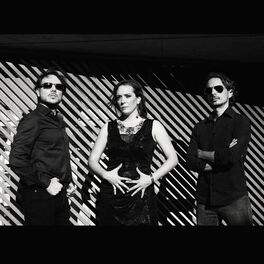 Rafael Lázaro and Carlos Z started playing guitar together in their teens, when they also co-founded their first metal bands and achieved local success in the early 2000’s. As it often happens, life got in the middle: they had to part ways and get off the scene. Both have been growing their love for music and guitar ever since, Rafael Lázaro from the comfort of his bedroom and the occasional local jam, and Carlos Z being on and off the scene intermittently with several bands. Carlos Z is also co-founder and guitarist for the melodic metal band Xeria (Tierra, 2019), and has recently become an Aviator Custom Guitars artist. After all these years they’ve decided to play together again. In 2020, they’ve teamed up with vocalist Sara Lázaro to form Red Balance. Her passion for music is rooted in her father’s love for rock and flamenco. She started singing in choirs and ensembles but her attraction for rock led her towards learning vocal technique (she is an authorized Complete Vocal Technique teacher) and entering the local rock scene, where she is also vocalist of blues-rock cover band R.A.F.