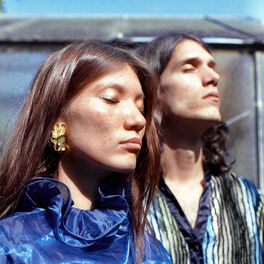 Behind the Parisian duo Fleur bleu.e, are Delphine and Vladimir, two researchers whose influences stretch from Alternative Rock (Broadcast, The Smiths) to French Pop (Françoise Hardy, Elli et Jacno). When they met in 2019, they found their musical half, dark and bright, and soon started writing songs fueled by their teenage myths. Fleur bleu.e knits a music made of dreams and nightmares that calls our fragility to express itself, beyond the prism of binary gender. It praises our inner sentient being and the beauty in little imperfections. Their first single Horizon was released in November 2020. A poem about love and forgiveness congratulated by the media, it introduced their melodic and experimental music style. In April 2021, the duo released STOLT 89 produced with Ben Etter (Deerhunter, Franz Ferdinand, Hazel English), a feminist manifesto lifted on a shadowy pop carved by electric guitar licks. In May 2021 they came back on stage at the mythical Parisian club La Flèche d’Or to shoot four songs of their first record scheduled for 2022.