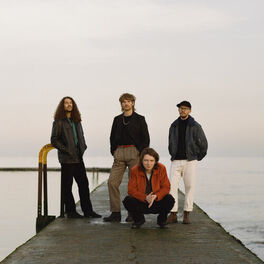 Do You Remember the Times

Don't Dream It's Over

All in My Head

Just That Time of the Night

ISLAND are an alternative rock band from London formed of vocalist Rollo Doherty, guitarist Jack Raeder, bassist James Wolfe and drummer Toby Richards. After years of playing together in bedrooms and dingy London studios in a blend of different line-ups, they found themselves in Oxford, where ISLAND was formed and a new sound was found. ISLAND have firmly established themselves as one of the UK's most exciting live bands having toured across the UK, Europe and North America, including performances at SXSW, headlining the BBC Introducing stage at Reading & Leeds, and a sold-out show at the prestigious Koko in their hometown. The band released their critically acclaimed debut album 'Feels Like Air' in 2018, inspired by their extensive time on the road, followed up by the 2019 EP ‘When We’re Still’. The band are back in 2021 with their new album 'Yesterday Park', coming out on 25 June via Frenchkiss Records. Recorded in semi-locked down London last summer, ISLAND's second record sees the band relinquish their traditional self-production duties to collaborate with producer Mikko Gordon (Thom Yorke), kicking off with 'Octopus’, 'Everyone's The Same' and 'My Brother', and now their latest single 'Do You Remember The Times'.