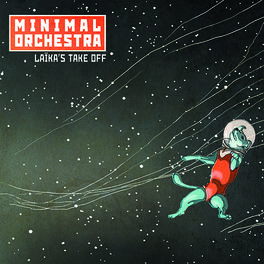 Minimal Orchestra (Fr) Explorers demanding of urban poetry, wild and tender, Minimal Orchestra since 2004 boasts a jazz style with electronica influences, both original and unclassifiable, and released two albums in quick succession between 2006 and 2008 on the label Ozore Age (distributed Pias ), resulting in many concerts in Europe (France, Czech Republic, Hungary, Germany, Spain), and sitting a solid stage reputation both on the quality of their improvised musical performances that their communicative energy. Their elaborate compositions, rich in rhythms and changing universe, give way to psychedelic and dreamy sounds, haunting and catchy ... by merging the genres without ever lapsing into basic experiment, never narrow or abstract, always alive and free ! In 2015, Minimal Orchestra returns to the front of the stage, accompanied by the label IOT records; the time of a gestation that has allowed the former trio became a duo (bass / keyboards & machinery) to treat a more electronic transition, but equally enjoyable and without concessions ! Two EP's announce the preparation of a new album scheduled for late 2016 : an EP released on the label in March 2015 "Anger Management EP" and the second "Bizarre EP" released on November 6. Now, on 18th november 2016, the new album "Laïka's Take Off" is available ! A hybrid jazz at the intersections of the jungle, jazz and electronica that sounds like a terribly well organized freestyle! The richness of such a directory whose strength lies in improvisation is to find 100% on stage with a live set machinery / keyboards / bass just as unbridled, alternating complexity and efficiency, all with a contagious energy!