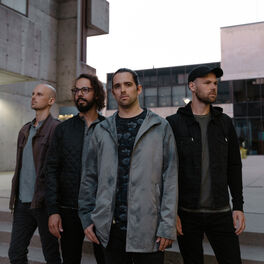 Your View of a Former Me

No Way to Live

Hailing from Toronto, Canada, Phantom Atlantic create anthemic modern rock for seekers, welding art-rock atmosphere and eccentricity to an arena-rock frame of soaring vocals, airtight guitar riffs and chest-rattling rhythm. Arriving on the scene in 2017, the outfit's dynamic sound and unforgettable live shows quickly earned them a reputation as "a Toronto band to watch" (blogTO). Their 2018 singles “Lessons” and “Beneath Your Moment” garnered Phantom Atlantic wider attention with features on national rock radio, coveted spots on Spotify editorial playlists, and multiple tours across Ontario and Quebec that saw them share the stage with acts like The Elwins, The Coronas, and Texas King. It was at one of the band’s packed hometown shows that they first connected with future co-writer and producer Steve Molella of iconic Canadian rock outfit Finger Eleven. What began as a few writing sessions to see if there was a creative spark blossomed into a months-long collaboration, out of which came Your View of a Former Me - a sharp, precise, and volatile five-song EP charting a crooked path towards repair and salvation that never quite ends. Released in June 2021, Your View of a Former Me premiered with a week-long spotlight on Oshawa’s 94.9 The Rock and debuted at #3 Rock Album and #6 Overall Album on the iTunes Canada charts. Phantom Atlantic has now teamed up with Molella once again to put their own high-energy rock spin on Fatboy Slim’s hit song “Praise You," available everywhere now.